A restraining order is a legal option when you need the court to order someone to stay away from you. In cases of domestic violence or abuse, restraining orders can be a useful and necessary form of protection against the abuse.

A domestic violence restraining order can legally compel the restrained person to stay away from you or your home and stop talking to you, among other things. However, there can be circumstances where a restraining order is unreasonably placed against you.

Whether you are a victim of abuse or have been accused of abuse yourself, navigating the court process for acquiring or fighting restraining orders can be complicated. Retaining a skilled and experienced Los Angeles, CA, restraining order lawyer is essential to achieving a favorable outcome.

Whether you’re seeking a restraining order against a neighbor, colleague, or family member—or you’re looking to fight an order that’s been issued against you—we’re here to help.

There are three main types of restraining orders:

The attorneys at the Law Office of Christopher Chaney can help you pursue a restraining order against someone else or fight one that has been issued against you.

Under family code section 6250 of California law, a law enforcement officer may request an emergency restraining order if it is believed that a person is in immediate danger of domestic violence.

The purpose of an EPO is to protect an abused person from their abuser while they are in the process of applying to the court for a temporary restraining order.

Only law enforcement officers may request EPOs on behalf of a person believed to be in danger. To issue EPOs upon the request of police officers, judges must be available 24 hours a day.

What Happens After an Emergency Restraining Order Has Been Issued?

Under Family Code section 6251, an Emergency Restraining Order has to be issued by a judge or a commissioner. It will be issued after the following has been established:

Once it has been issued, an EPO may be immediately enforced for one week. If the abuser lives in the home of the person requiring protection, they may be ordered to leave the house for the period of the restraining order.

For cases involving civil harassment restraining orders, an EPO can only be issued if the person requesting protection is the subject of stalking.

Civil harassment, in general, includes stalking, abuse or threats of abuse, or harassment by someone like a neighbor or a friend. It can also include harassment from a family member that is not considered domestic violence.

In these cases, California law allows you to file a Civil Harassment Restraining Order. Your civil harassment lawyer can help you navigate these laws to ensure that your rights are protected.

Temporary Restraining Orders are longer-lasting protective orders that are valid for up to 25 days. They are issued when a judge believes that a person is in immediate danger and needs protection before the trial date.

If a Los Angeles court has issued a TRO against you due to domestic violence, it means you may not contact the plaintiff for any reason.

It may restrict you from doing other things as the different types of restraining orders mean different things. You may not be able to go to places where the plaintiff may be, be required to surrender your firearms, and lose the right to custody of any children.

Once the temporary period is reaching its end, a court date is held where the judge determines whether a Permanent Restraining Order must be issued.

What Are Your Rights If Someone Has Filed a Restraining Order Against You?

It is important to know what rights you have when someone has filed a domestic violence restraining order or a Civil Harassment Restraining Order against you.

If there is an order against you, you should always obey it as any violations are a crime. You should also immediately call a law firm and hire a criminal defense attorney who knows family law.

They can represent you and advocate for you, especially because there may only be a few days before you must go to court. The criminal defense attorney can help you gather evidence, prove your alibi through photo or video, and list witnesses who can attest to the incidents, the plaintiff, or your character.

These are things you should avoid doing after you have received a Los Angeles restraining order:

If you were arrested or charged with violating one of the types of restraining orders, you could face severe consequences that can permanently affect your record in Los Angeles.

This is why you should contact a law firm with a qualified defense attorney about your case. They will be able to protect your reputation in Los Angeles and help you avoid jail time.

What Happens if the Restrained Person Violates the Protective Order?

Los Angeles CA rules are extremely strict on implementing all restraining order laws. If the restrained person violates the protective order, they can be arrested and charged with criminal contempt.

The consequences of violating a protective order depend on whether it is civil or criminal. In most cases, if someone violates a civil protective order, he will have to pay fines and/or serve jail time for his actions. Criminal violations are punished more severely than civil violations because they involve breaking the law.

A judge may sentence someone who has violated a criminal protective order to up to six months in jail for each violation of an injunction that prohibits harassment or threats against another person.

When the court issues a restraining order against you, you might not know what actions to take. First, you should not ignore the order. Be proactive and speak to a Van Nuys, CA attorney about your rights and options.

After a restraining order has been issued, breaching it is a criminal offense and can impact your rights. In addition to facing jail time, your gun ownership rights, child custody rights, and reputation may be in jeopardy.

On the other hand, if you are pursuing restraining orders against another individual, a trusted Los Angeles lawyer could help you follow the procedures required to get a restraining order and advocate for your rights and safety in court.

Regardless of your circumstance, you are not alone in your fight. If you or someone you love needs to file a restraining order or is faced with being the restrained person, the Law Office of Christopher Chaney is here to help.

Time is of the essence — contact us today for a free consultation. We will assist with finding a solution to whatever problem you may face. 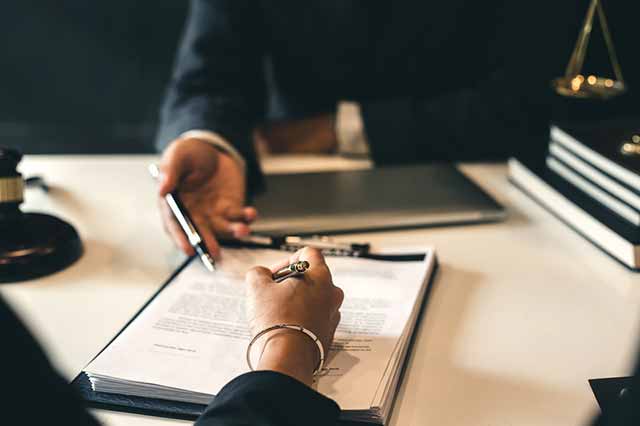